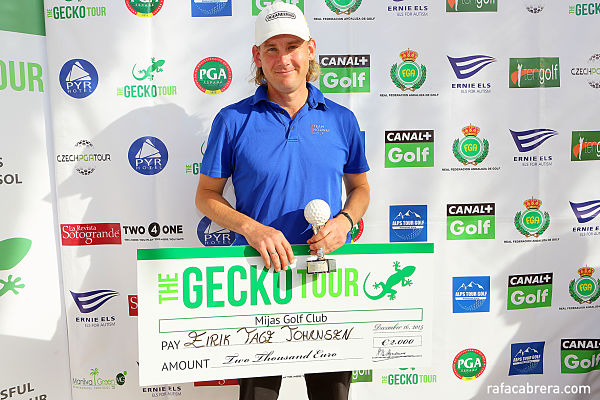 Eirik Tage Johansen has become the first player in the history of The Gecko Tour to win two consecutive tournaments. The Norwegian won nine days ago at Alcaidesa, and made it an unprecedented double with his victory this week at Mijas Golf Club.

Nordic by adoption and passport although born in the United States, Johansen carded a total of 202 over the three days, securing a convincing four-stroke victory over his nearest rivals, Britain’s Jamie Dick and Spaniards Gabriel Cañizares and Marcos Pastor. The champion was always in control, carding 63 and 69 at Los Lagos and a first-round 70 at Los Olivos. He was rarely threatened, demonstrating once again his excellent current form.

Johansen also became the first player to win twice this season and made further inroads on the order of merit, although Marcos Pastor ended the year as winter champion. The Córdoba golfer was, in fact, in the best position to challenge Johansen’s victory march, having begun the day just one stroke behind. However, a good start by the overnight leader and a hesitant opening by Pastor gave the early advantage to the Norwegian. By the ninth hole, the difference was three strokes.

Johansen was understandably happy and proud to have made Gecko history. “I didn’t know that no-one had been able to win twice in a row before, although it doesn’t surprise me because the level is very high, and that makes me even more satisfied with the win. The key to my good form at the moment is that I’m really enjoying playing. I believe it’s important to be in a good frame of mind to be able to card low rounds.” As for the tournament overall, Eirik said “the key round was yesterday, when I carded 63 and took over the lead. I didn’t know much about this course but things turned out well. I dedicate this victory to my wife and all my family.”

The week of golf at Mijas was superb. MIjas Golf presented the courses in excellent condition, and the Costa del Sol once again lived up to its name – as all 54 holes were played in radiantly sunny weather, with temperatures of around 25 degrees. And yes, we’re in December! This is just one reason why The Gecko Tour is the premier winter circuit in Europe.

After the second round, played on Tuesday, the field was cut to the leading 20 players plus ties. This came at one-over, a good indication of just how high the level of play was at Mijas this week. Jordi García del Moral, reigning champion of The Gecko Tour, made his debut this season with a share of 14th place, an excellent result bearing in mind he has hardly been able to practise all autumn as he is completing a golf course management scholarship at Valderrama.

The Gecko Tour now takes a break for a few weeks over the Christmas holiday period. The circuit will return in 2016 on 12 to 14 January with the next tournament at Los Naranjos Golf Club and La Quinta Golf and Country Club.