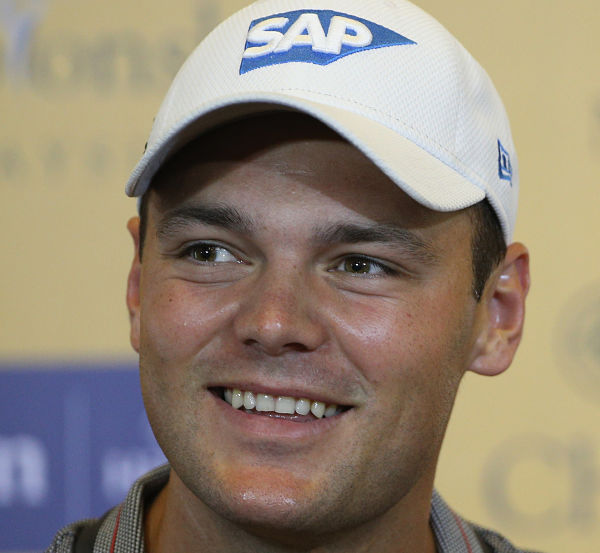 Martin Kaymer is feeling very much at home at Royal Selangor GC, the host venue for this week’s Maybank Championship Malaysia and a layout which reminds him of the courses he grew up playing in his native Germany.

Royal Selangor, founded in 1893 and re-modelled in 2005, is making its second appearance on The European Tour International Schedule after hosting the 2002 Malaysian Open, and Kaymer is a big fan of the “old school”, tree-lined course.

Kaymer has not won on The European Tour since the 2014 US Open Championship but after deciding to take a holiday to recharge his batteries, having missed the cut in the Omega Dubai Desert Classic, the German is feeling refreshed and ready to win again.

Meanwhile, newlywed Kiradech Aphibarnrat is giving his wife her first taste of what it is like to be married to a player on The European Tour – by delaying their honeymoon to tee up in the US$3 million dollar tournament.

The 26 year old married his partner Tunyatorn Chaiyarat on Valentine’s Day in a ceremony that involved a hot air balloon ride over Singha Park in their native Thailand, and just four days later begins his quest for a second victory on Malaysian soil.

And while that may seem unorthodox to some, Aphibarnrat knows he has the support of his new bride as he returns to the scene of his first European Tour triumph in 2013.

Martin Kaymer: “I’ve played many times in Malaysia, but this has to be my favourite course here. It’s definitely my kind of course, I grew up playing tree-lined courses so in some ways this place reminds me of home – although it’s a little bit warmer here! You really need to move the ball both ways, and I enjoy the challenge of shaping your shots. You need to hit lots of fairways and then wait for your chances to come along, so it’s a fun course to play.

“The golf course suits me, I had a very nice group in the Pro-Am yesterday, we’re staying in a nice hotel, the food is good and everyone seems very happy and smiling, so I have no reason not to relax and feel happy! You always expect a lot from yourself, but hopefully I can handle that this week.

“I practised hard over the winner, sometimes it pays off straight away and other times it takes longer. The last few years, I’ve managed to get off to a fast start, especially in Abu Dhabi, but this time I’ve struggled to find my rhythm. So I took time off last week and went on holiday, and it really helped to clear my head.”

Kiradech Aphibarnrat: “I’ve been staying in contact with my wife on social media. She teaches in Thailand so unfortunately she can’t come this week because her students have exams next week. But my Mum will be here on Friday. I don’t want to keep reminding my wife about the fact that we were meant to be on honeymoon this week, because she will get angry with me! But she also understands my work.

Oosthuizen keen to rekindle Malaysian memoriesNews
22 January, 2022
Despite being plagued by flight problems – of both the ball-striking and aeronautical type – Louis Oosthuizen is hopeful of continuing his love affair with Kuala Lumpur, the host city for this…
Saudi International ‘Bryson-proofs’ its driving range as big-hitting DeChambeau promises to go “even further” off the tee in 2022News
22 January, 2022
Big-hitting Bryson DeChambeau has revealed he will arrive at next month’s PIF Saudi International powered by SoftBank Investment Advisers hitting the ball “further than ever” – prompting…
FootJoy brings the heat to athletic golf footwear with all-new FUELNews
22 January, 2022
FootJoy, the #1 Shoe in Golf, continues its pursuit of game-changing performance in its athletic offering following the introduction of the all-new FUEL. Igniting FJ’s latest footwear range…
LET announces record-breaking 2022 scheduleNews
22 January, 2022
The 2022 Ladies European Tour season is set to present the greatest number of tournaments and prize money in the organisation’s 44-year history. Thanks to the support of new and long-term…
Thitikul becomes youngest winner of Race to Costa del SolNews
22 January, 2022
Thailand’s Atthaya Thitikul clinched the 2021 Race to Costa del Sol title thanks to her second-place finish at the Aramco Saudi Ladies International. In her first full season on the Ladies…
Casey, Garcia and Morikawa commit to 2022 Slync.io Dubai Desert ClassicNews
22 January, 2022
World Number Two Collin Morikawa and fellow Major winner Sergio Garcia are amongst the top-ranked global stars confirmed to join defending champion Paul Casey at the Slync.io Dubai Desert Classic…
Golf's modernised Rules of Amateur Status publishedNews
22 January, 2022
Golf’s new Rules of Amateur Status have been published by The R&A and the USGA ahead of coming into effect on 1 January 2022. The work is the latest step by the governing bodies to make the…
Empordà Golf earns top marks on the European Challenge TourNews
22 January, 2022
Empordà Golf Resort has cemented its reputation as one of Europe’s top golfing destinations after winning widespread acclaim from players competing in two European Challenge Tour…
Joburg Open tees off the 2022 European Tour seasonNews
22 January, 2022
The 2022 European Tour season will begin in South Africa next month when the R17.5 million Joburg Open is played at Randpark Golf Club from November 25-28. One of the City of Johannesburg’s…
Seve, star of the Real Club Valderrama charity auctionNews
22 January, 2022
The indelible memory of Seve Ballesteros impregnated the event held last Tuesday at the Real Club Valderrama in the setting of the Estrella Damm N.A. Andalucía Masters. Promoted by the Junta de…