Tengolf
Inicio News Mark Wilson: “Garcia’s swing is one of the most beautiful things I’ve...
Compartir 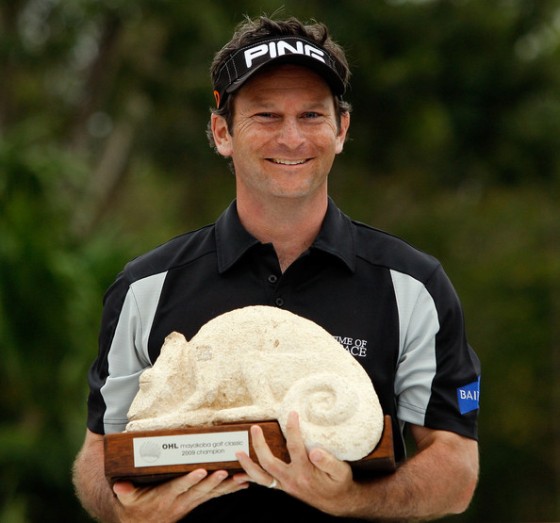 The Mayakoba Classic, only regular PGA Tour tournament played outside the United States, is around the corner and Ten-Golf interviewed its champion, the American Mark Wilson. Wilson belongs to the players Advisory Board for the PGA Tour and for the last three years belongs to the exclusive club of players with one win a year in the American tour. This week he wants to repeat in Mayakoba…

Has the new World Ranking maximum divisor affected your ranking at all?

I haven’t really paid any attention. I haven’t noticed … I am not sure. I think is a good change. I prefer it. Is it going to be 50 the maximum divider?

Is 60 starting in January, but eventually it will be 52 in two years.

I think is a great change. It was silly to basically punish players for playing a lot. The whole idea is encourage the best players in the world to play more. There has been instances where guys look at it and skip a week because if they play it may hurt and not get in to a World Golf Championship or the Masters two weeks later. I think is a very good change.

You are right now 97 in the World Ranking. Is that the position you were before?

After your win in 2009, what are your goals for this year? Where do you want to be towards the middle of the year?

I don’t really work on goals. I more or less play each day. Right now my goal is be a good example to others. I try to go out there and keep that in mind whatever I play. And realize that we are entertaining, a lot of people are watching us play and hopefully I can give them a good experience. That’s my goal for the year. And if I do that I think my golf scores are going usually going to be low.

You started the year at the SBS Championship and then you got a top 20 at the Sony Open. How is your game right now? How are you feeling?

It’s ok. From 1 to 10, where 10 being where I feel I could go out and win, I probably would be ranking around 7 or something like that. It’s amazing how momentum is a big factor in my game. If a get things rolling on a Thursday and something clicks, I just carry it over the rest of the week. A few great putts or a few shots … and I feel I can contend every week.

Your defense in the Mayakoba Classic is coming up in a few weeks. How was your first defense when you won the Honda Classic in 2007?

It was kind of funny. It was a new experience. Obviously a lot more demands on your time. More people know who you are and paying attention to what you are doing. I feel that I did pretty well, I played very well except for a couple of holes. I finished poorly on Friday and I missed the cut by a couple of shots. Certainly, is one of the worse feelings you can have, when you have such a great experience and the following year you miss the cut. Hopefully I am not doing that again here in Mayakoba. I am reaching for the stars and hopefully I can repeat what I did last year.

What changes, if anything, in 2006 that you didn’t have to go back to Q-School?

My mind set changed. I just went ahead and played my own game, not trying to change it in a weekly or daily basis, like I did before. Always trying to find the secret on my golf swing, or putting stroke or short game. In 2006 I just made the choice to trust my game and go out there, look at the target and try to hit it … try to be a kid again. Try to play like a kid. And not really think as much. I feel like my brain outweigh too much early in my career and I try to take a lot thinking off the golf course don’t want to overcharge … I still think through course management things, but once is time to pull the trigger on a golf shot, I am not thinking very much. I really believe that has been a big difference in my performance in the last three years.

Do you see yourself entering the circle of regular winners in the PGA Tour? May be getting one victory a year or even more?

I see myself that way. Who knows in reality if that is going to happen. I play the best I can every week some weeks someone beats you and some weeks you beat yourself. I am enjoying the ride so far and I am going to continue to ride it.

Let me give a little Spanish turn to this conversation. Do you speak Spanish?

Have you ever played in Spain?

I haven’t played with Sergio García. I would like to play with him sometime. Everyone says that he is the purest ball striker they’ve ever seen. A swing that is just … through impact, one of the most beautiful things I have ever seen. I played with Jose María Olazábal and I find him to be one of the nicest gentleman I have ever met. Those are my two experiences with Spanish men in the PGA Tour.

One last question. What do you know about Seve Ballesteros? Have you seen him playing?

I’ve never seen him in person. I saw him in person when I was a young kid watching the Masters in Augusta and I also saw him on TV. What I saw from him was what I was telling you earlier. He just played his game. He just let go and enjoy getting the ball in the hole. I believe that is what has worked out for me lately, too. The tendency on the PGA Tour to get a little too technical instead of just playing the game. Seve mirror Arnold Palmer in that sense where he was a fun player to watch.