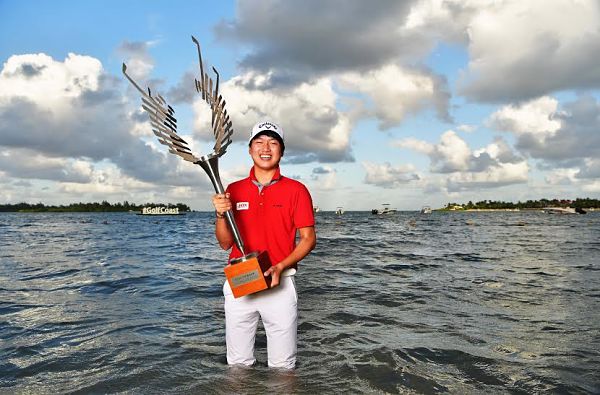 Korean sensation Jeunghun Wang became the youngest player in European Tour history to win consecutive events after coming from behind to claim the AfrAsia Bank Mauritius Open a week after making his breakthrough in Morocco.

The 20 year old was high on confidence after beating Nacho Elvira in a play-off for the Trophée Hassan II title, and he capitalised on Bangladeshi Siddikur Rahman’s late collapse by birdieing the last to win by one shot at Four Seasons Golf Club Anahita.

Siddikur had a three-shot lead on the 16th tee, but double-bogeyed that hole and dropped another shot at the par three 17th to head up the last level with Wang. Both players hit their second shots into the par five right of the green, and it was Wang who got up and down for a crucial birdie to finish on six under par.

They were the only players to end the €1million event in red figures as strong winds made for tricky conditions on the Mauritian east coast, with Belgian Nicolas Colsaerts and Argentine Estanislao Goya sharing third place on level par.

Australian Andrew Dodt, the leader for the first two rounds, had to settle for fifth place, while young South African Brandon Stone took sixth on two over.

“I can’t believe that I’ve won two weeks in a row. I’m so excited right now and really happy that I have won. I probably had luck on my side today. I wasn’t even thinking about winning this week until the 16th. I missed a lot of putts so I thought I didn’t have any chance. I hit my second shot into the 18th well, but it just went off the green. I was just trying to make par, but I hit the bunker shot close and gave myself an easy putt for a birdie. It was fantastic. I hope I can win three in a row, but next week is a really big tournament and it’s my first time in Ireland, so I’m not sure. I’ll be trying my best.”

“Well it was good until the 16th, but unfortunately I don’t know what happened. I went out of bounds with the first shot. I gave my best. It’s part of the game. Maybe I’ll have something good in the future. I was trying to hole that chip on the last for eagle. It was a good chip but the putt for birdie wasn’t good. It wasn’t my day. Before this week I was really struggling with my golf, so I’m really happy to finish second.”

I had a decent back nine with a nice eagle (13) and birdie (18) to finish but it was a bit disappointing. I came into last round third and I finished third so it wasn’t the nicest day but it’s not that bad either. It’s always the last few holes that are most crucial in a tournament, especially from 15 onwards. That is the toughest in the last round. Anything can happen. Unfortunately Siddikur had a bad tee shot on 16 and everything changed from there. The wind played a big part but overall, it’s still a very well-designed golf course. I’m attached to this course and I’ve seen how golf has evolved here. I am very proud to be attached to this place.”

“I’m very happy with this week. I played well all day, and I knew I had to be patient. It paid off because I made a good birdie on 15, parred 16 and 17 which are tough holes and made a great birdie on the 18th to get in the top five which means I can go to Ireland next week. It was very tough mentally because one bad swing and you can end up with a big number.”

Dodt edges ahead in MauritiusNews
15 April, 2021
Australian Andrew Dodt extended his advantage at the AfrAsia Bank Mauritius Open with a steady two under par 70 on another exceptionally windy day at Four Seasons Golf Club Anahita. The 30 year old…
Kaymer hopeful of comeback win in AustriaNews
15 April, 2021
Martin Kaymer arrives at this week’s Austrian Golf Open confident of clinching a result which can kick-start his 2021 campaign and help him back on the path to Ryder Cup and Major glory. The…
5 Tips for Successful Golf BettingNews
15 April, 2021
The prospect of legal sports betting gets on the horizon with each new day. The common point of concern among golf enthusiasts is how exactly sports betting legalization will affect the sport. Well,…
European Tour Qualifying School schedule revealedNews
15 April, 2021
The European Tour Qualifying School has been bolstered by the addition of four new venues ahead of the competition’s return in 2021. Montado Hotel & Golf Resort in Portugal and…