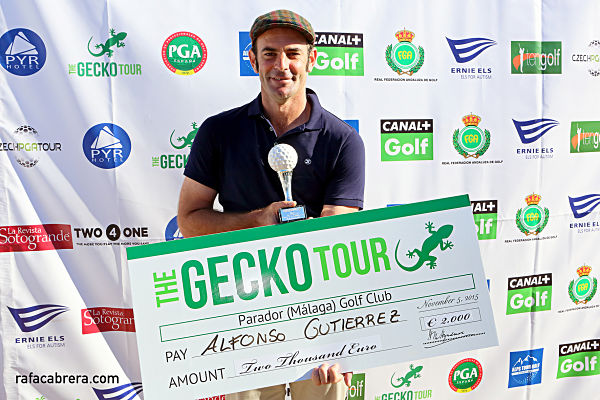 Alfonso Gutiérrez won the second leg of The Gecko Tour that concluded on Thursday at the Parador course in Málaga, an exceptional venue for the event together with Guadalhorce Golf – which was co-host for the first two rounds. One special highlight this week was the presence of Carlos del Moral, a European Tour pro who is preparing for the Qualifying School Final by fine-tuning his game on The Gecko Tour.

Gutiérrez won the title after a gripping final round, not ideal for those with a heart condition – as the classic saying goes. The Andalucian golfer secured victory in sudden-death against Manuel Quirós after both had finished on 210. So exciting was the finale that no fewer than five players finished within one shot of each other, a Pyrrhic margin over 54 holes that shows perfectly well how evenly matched and enormously competitive the players are on The Gecko Tour. Daniel Osorio, Juan Carlos Osorio and Viktor Kratz finished one shot out of the play-off.

The final holes were a battle of nerves and birdies. All went for the jugular in an effort to emerge triumphant. Without exceptions… in a spectacular show enjoyed by all at the Parador. Alfonso made birdie on the 16th, Quirós responded with his own on the 17th, an effort matched by Daniel Osoro, and Juan Carlos on the 16th and Kratz on the 16th and 17th also finished with a birdie flourish. A golfing whirlwind of the highest quality, and a well-deserved triumph for Gutiérrez, who defeated Quirós on the second extra hole.

There was a delightful story behind this victory by the Sevilla veteran, born in Triana but now resident in Málaga (both physically and emotionally). Rarely could it be truer to say that the win was all – or at least significantly – down to love. Alfonso had not competed on The Gecko Tour for some time, as he was unable to find sponsors willing to offer support. A real shame because his game is probably in the best shape of his career at the moment. This is demonstrated clearly by his recent results: winner of the 2015 PGA of Andalucía tournament, victorious in the Felipe Pérez Pro-Am at Mijas Golf, top-10 in the Spanish Professionals Championship and two cuts made on the Alps Tour. Impeccable. However, he is hardly able to play because of a lack of financial resources.

Gutiérrez was not even thinking about competing in The Gecko Tour event at the Parador and Guadalhorce, but last week he received a surprise call from the Tour’s office. It was his girlfriend and she confirmed that, thanks to the invaluable help of her mother (Alfonso’s mother-in-law), he was invited to compete in the Gecko tournament. “She told me I looked really sad because I couldn’t play, and she wanted to help. It was an incredible gesture and I couldn’t be happier to have achieved this victory for her,” he said after signing his card and posing with the trophy. He certainly could not have imagined a better way to open his winning account on The Gecko Tour.

The tournament was held over three days, with a cut after the second round set at one-over, which a total of 25 players surpassed. The third leg of The Gecko Tour will be held next week at Santa Clara and Marbella Golf Country Club.

Kinhult has arrived
22 January, 2022
Amateur golfer Marcus Kinhult was crowned the first champion of The Gecko Tour 2015/16. The fifth edition of the best winter tour in Europe couldn’t have got off to a better start. One of the best…
Donaldson remains ahead in DubaiNews
22 January, 2022
Jamie Donaldson signed for a three under 69 to maintain his one-shot lead and set the clubhouse target at 13 under par on a fog-delayed Friday at the Omega Dubai Desert Classic. The Welshman…
Masterful Garcia to join Westwood at British MastersNews
22 January, 2022
Masters Champion Sergio Garcia has confirmed he will join tournament host Lee Westwood at the British Masters supported by Sky Sports at Close House, in Northumberland, England, from September…