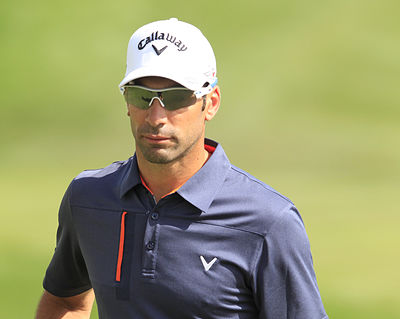 End of the 2016 season and I’m already in South Africa starting off 2017, where I’ll play by invitation. Well, let me clarify: I’m actually still not in South Africa, but in Zurich, waiting on the plane after a small glitch. Yesterday I set off from Palma de Mallorca where I spent some incredible days at Olazábal and Nadal, then to Zurich, but a 3-hour delay due to a mechanical problem with the front wheel of the plane caused me to miss my connecting flight to South Africa…But the craziest part of the whole thing is that my wife, María, was waiting for me in Zurich and we were actually at the airport at the same time, but she was already on the plane and I didn’t make it in time, so she went ahead of me and I had to wait a whole extra day to catch the next flight.

In the Finals of the Qualifying School things didn’t go as I’d hoped, but I’m not going to beat myself up over it either. That day the really strong wind in the PGA Catalunya finished a lot of us off, but anyway, the wind was a factor in everyone’s game, so…

I’ll tell you how I’m planning for next year. With my ranking in the European tour, 19, I’ve been seeing that I’ll have access to six or seven tournaments, but of course, you can’t plan for tournaments that you won’t be able to confirm up until a few days beforehand. So my idea is to do some general planning around the Challenge Tour.

And I would have to organize my schedule based on that calendar, logically, because it is possible that I get access by invitations, mostly thinking about competing before the Challenge Tour starts, which isn’t until March.

Meanwhile, I have no option other than to continue to work hard with my new coach, Hernán Rey, whom I’ll see when I get back from South Africa, with the goal of looking for the naturalness in my swing.

Focused on competing, not on how I hit the ballÁlvaro Quirós
23 July, 2021
I can only walk away with a lesson learned after everything that’s happened on the Gulf Swing. Even in the two weeks in Abu Dhabi and Qatar, where the results weren’t great, but I had the right…
Now I’m convinced that everything is going to changeÁlvaro Quirós
23 July, 2021
A few weeks have passed since my season ended. I had surgery on my left eye again due to a condition referred to as Surfer’s Eye, which I had treated over a year ago in both eyes. Apart from…
I’ve lost many of the distinguished qualities I started withÁlvaro Quirós
23 July, 2021
I’m writing to all of you while I spend a few days resting and reflecting, calm and collected, because I suspect that my problems are more about confidence than anything else. I continue to feel…
Spieth, Tiger and the green shootsÁlvaro Quirós
23 July, 2021
I know it isn’t very original, but my bet’s on Jordan Spieth to win the Masters. It could be the big surprise. I was watching him in the Houston Open, he did well and is coming off a lucky…

The latest ...
Rahm in the hunt as Fitzpatrick and Detry lead in Scotland
News
10 July, 2021
The story behind the crucial change in putt before the US Open
Jon Rahm
9 July, 2021
Up to 32,000 fans to attend on each Championship day
News
19 June, 2021
Rahm and Thomas set to star in Scottish showpiece
News
10 June, 2021
Magical Malchirand wins Ladies Italian Open
News
30 May, 2021