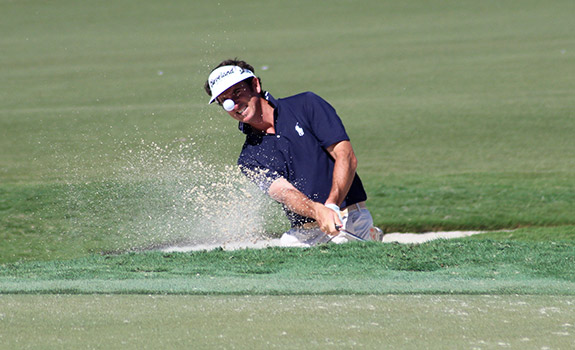 It’s incredible how time flies, we’ve already been in Spain for one month! Our arrival was a little chaotic because we only spent a couple days in Madrid before heading down south, and I had a thousand things to do and people to see before leaving.

When I say ‘we’, I’m referring to the kids and I, because Gon had to stay in the US since he had other tournaments left to play before returning to Europe to play in the BMW in Germany. The results weren’t as hoped, which is why there was a change in plans at the last minute, and despite the fact that it was the last thing he wanted to do, he had to withdraw from the tournament in Cologne. Much to our regret, as we were counting down his return to the European Tour by the minute, and also because I had intended to reunite with old girlfriends of mine, but duty calls in the end, and the primary objective at this point is to assure the American card. Even so, I’ll take advantage of this post to send my regards to all my friends who I left “hanging” : Lara, Loreto, Macarena and especially Lucía, Fabrizio Zanotti’s wife, who, as you all know was the winner of the tournament. Big congratulations to both of them!

Since he was going to be away for many weeks in a row, Gon came back home that week to see the kids, whom he’ll go 8 weeks in a row without seeing. He took advantage of that week to rest and completely disconnect, beach, pool, a few dinners out and not much else, because in the end, he travels so much throughout the year that the only thing he wants to do when he comes home is rest and relax. During the weekend, he took advantage to see José Carlos to have a look at his swing, and on Monday, morning he left again for the US. I’m confident that these next couple weeks are going to be key in reaching his goal, because he deserves it for the effort he’s making and all the work he’s put into it. He’s never traveled so many weeks in a row, and we’ve never gone so long without seeing him; thus, it will all pay off soon, I’m sure of it.

Next week, I’m going to see him at the British Open, and I couldn’t feel more like going. It’s always a really fun week because Rocky Hambri, Gonzalo’s manager, rents a house every year for his players who qualify for the tournament. This year, the Europeans are Francesco Molinari, Thorbjorn Olesen and Gonzalo, and Americans Dustin Johnson, Brooks Koepka and Justin Leonard. We’ll all get together for dinners that are really entertaining since there are always more people who get invited and it ends up being a large group. But we only speak in English, because the only one who speaks Spanish is Francesco.

The same as the week of the Masters, I’ll try to update the blog as much as possible during the British Open. I don’t know if I’ll have time to write every day, but I’ll post various entries to keep you updated on what is happening around here, and hopefully it’s all good news for us!