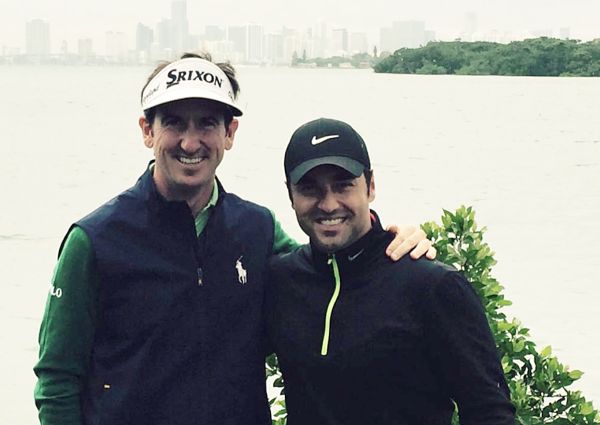 We’ve been having some pretty cold days lately for Miami, and since we’re used to this tropical climate now, as soon as the temperature drops we all get sick! Between colds, I’m taking the opportunity to dive into all the books I’ve been wanting to read and I wanted to tell you about two that I especially liked, both about golf, but narrated from two different perspectives.

The first is ‘Slaying the Tiger’, by Shane Ryan, a book that was published in the US a few months ago and which caused quite a stir and created high expectations on the golf front. I found him through Twitter and I decided to buy it for Gon so he could read it on one of his trips. As a journalist, I really liked the author’s idea of ‘infiltrating’ the PGA Tour for an entire year to tell readers about what the tour is like on the inside and about what some of golf’s most famous athletes are like. I thought the chapter dedicated to Jason Day was especially good, where he tells the story of his career and his youth, not easy by any means, but true.

The only problem I have with these types of books is that the ending is based, in a big way, on the author’s perception of each golfer and, in my opinion, they aren’t completely objective. Let me clarify: if the author tries to interview a golfer who, for whatever reason, is having a bad day, he won’t walk away with a positive image of him, which will probably show through in the writing, although I will say that I agree with almost all of the descriptions depicted in the book. It was definitely very entertaining, with an original and appealing format, which tells intriguing stories. I recommend it to everyone!

The second one is called ‘Lost on the PGA and European Tours’, written by Jocelyn Hefner, Paul Casey’s ex-wife. It’s not at all about critiquing the golfers, nor gossip about the Tour. It’s, basically, her personal story after having spent ten years accompanying her husband on tournaments all over the world, her point of view and how she experienced it from the beginning.

I liked it because there are certain situations in which I felt so identified and it describes moments which every golfer’s wife or girlfriend have gone through at some point. There’s one chapter where she tells the story about how she got lost between holes walking through a tournament…! I can’t count how many times that’s happened to me, looking for shortcuts to cut a few meters out of the walk!

It’s a tough, sincere story in which she candidly describes how she put her life’s dream of becoming an interior decorator and professional horsewoman on hold in order to travel the world with her husband, something that took a toll on her in the end. Luckily, both of them have happily started a new life and there is not one part of the book that doesn’t refer to him with love and respect for all the good moments they’ve shared together. It seemed brave to me how she captured and was able to transmit the rough patches she had gone through, which is about transcendence and overcoming personal hardships, in which she tells many stories about experiences on the PGA and European Tours.

PS: I’ve attached a photo of Gon with David Bustamante, with whom he played a round of golf a few days ago and who my daughter Ali (3) described as “a dad who knows how to do many things.” He was constantly entertaining the kids. Awesome guy and wonderful family!