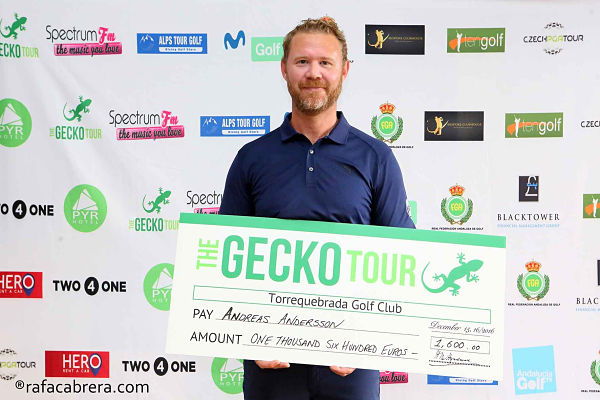 Andreas Andersson is the first player of the sixth season of the Gecko tour who can say that he’s won multiple times. The Swedish golfer was awarded his second victory in the last tournament of the year and the eighth on the calendar after competing atTorrequebrada with a six-shot advantage over second place.

It’s clear that Andersson doesn’t like to win just any old way. He won in the opening tournament at La Cañana, around the month of November, with another great performance. He beat Juan Quirós with a six-shot advantage and he did it again today. He took home the win with a final score of 124 shots (68 and 66) in two rounds (-10). He managed to establish a 6-shot difference once again, not at all common in professional golf tournaments, which speaks volumes to the exceptional state of this Nordic golfer’s game right now.

British golfer Steven Jones finished in second place, while his compatriot Chris Robb and Swiss golfer Jean Luc Burnier shared third place with a total of three under par. The winner’s circle closes with Canadian golfer Brayden Eriksen, who ended up in fifth with -1. He stood out quite a bit just like last year on this very same course.

The Gecko Tour is officially on Christmas break after having crowned its king. Andersson has not only won two tournaments, but he’s also come very close in others, like what happened this same week at Lauro Golf, when he finished in third just one shot from the tiebreak played by Nygard and Connor. “I’m playing really, really well. I’m happy. There’s nothing more to say. I’m playing a solid game of golf and putting well. I can’t imagine a better way to go home for Christmas break”, he said after winning. Andersson admits that his game is really on point. “I don’t know if I can say I’m at the best point in my career. Maybe that would be too much, but I’m definitely pretty close to being in my best moment. I hope I can maintain it these coming months after the break”, explains the 37-year-old golfer.

The key to Andersson’s win was on the first nine holes of the tournament. It was a whirlwind at Torrequebrada. He made five consecutive birdies between the 12th and the 16th holes and was already untouchable to the rest at that point. Another spectacular performance. “It’s difficult to say which win was more difficult between this one and the one at La Cañada. On both courses I played really well, although if I had to choose one I would say that the more difficult one was here in Torrequebrada because it’s one of the hardest courses of the year, especially on the greens” he said. Logically, Andersson will fight to win the Order of Merit. “It’s become the main goal of the season, hands down. Now I’m headed to Sweden with my family and I’ll be back in January to continue competing in the Gecko”, he exclaimed. The next tournament will be at the Parador de Golf in Málaga on the 9th and 10th of January.

Up to 32,000 fans to attend on each Championship dayNews
19 June, 2021
Following the UK Government’s announcement to delay the planned easing of restrictions, we are now actively working with the government and public health authorities, including those in Kent, in…
Rahm and Thomas set to star in Scottish showpieceNews
19 June, 2021
Two of global golf’s biggest stars are set to light up the Aberdeen Standard Investments Scottish Open with Justin Thomas and Jon Rahm - the current World Number Two and Three - confirming their…
Magical Malchirand wins Ladies Italian OpenNews
19 June, 2021
Back-to-back birdies on the final two holes sealed a maiden LET victory for French amateur Lucie Malchirand at the Ladies Italian Open. The 18-year-old carded a final round of 72 at Golf Club…
Wiesberger makes it back-to back victories in DenmarkNews
19 June, 2021
Austria’s Bernd Wiesberger defended his Made in Himmerland presented by FREJA title in style as he cruised to a five shot win in Denmark. The 35-year-old led after every round and having…

The latest ...
Up to 32,000 fans to attend on each Championship day
News
19 June, 2021
Rahm and Thomas set to star in Scottish showpiece
News
10 June, 2021
Magical Malchirand wins Ladies Italian Open
News
30 May, 2021
Wiesberger makes it back-to back victories in Denmark
News
30 May, 2021
Rolex celebrates landmark partnership as official timekeeper and partner of the PGA Championship
News
20 May, 2021