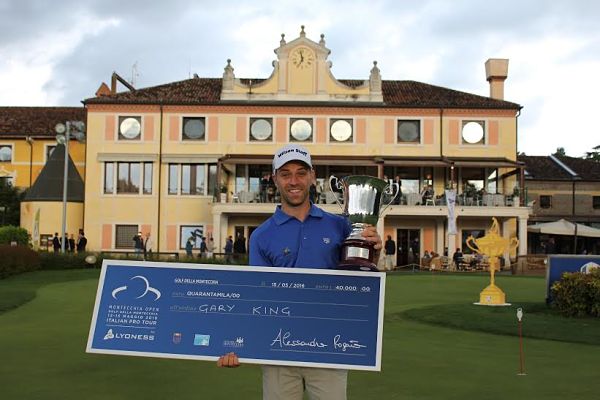 Gary King held his nerve to seal a maiden Challenge Tour title, birdieing his final hole from the greenside bunker to win the Montecchia Open by Lyoness.

The Englishman knew a four on the 18th hole would be enough for victory but pushed his approach into the sand, short-siding himself and having to leave himself a 15ft putt for birdie.

The 25 year old confidently rolled it in, much to the delight of the crowds at Golf della Montecchia, to deny Moritz Lampert and Matthieu Pavon the chance of a play-off after they had set the clubhouse target at 16 under par.

Only a year ago, King – who birdied three of his final five holes – was winning on the EuroPro Tour and he was delighted by how quickly he has achieved success this season.

“It’s unbelievable,” he said. “It’s funny because we just noticed today that it was a year ago today that I won at Celtic Manor on the EuroPro and I finished with four birdies on the back nine and sunk a few winning putts coming in, so to do it again is an unbelievable feeling, I can’t describe it.

“I was pretty calm on the 18th, I pride myself on being calm in situations like that, but with the troubles I’ve had out of the bunkers over the last year, all the hours I put in practising has paid off right there and to hole that putt was incredible.

“I’ll be celebrating on a flight home – I may have to have a bit of champagne on the plane, but it will be nice to get home and see everyone and celebrate with them.”

Perhaps inevitably, in a week where rain reduced the tournament to 54 holes, the threat of thunderstorms resulted in an hour delay midway through the afternoon, though this actually worked in King’s favour.

Having dropped two shots before the turn, coming off the course allowed him to refocus, and he duly made four birdies coming home to seal a one shot victory with a closing round of 69.

“The rain delay really helped,” he said. “I was struggling out there and wasn’t feeling very good with my game and the putts weren’t dropping, so it came at a really good time for me – I geed myself up a bit and made some great birdies coming in.

“The next goal is to move on and try to win the next event. I’ll take a bit of time off now, I’m going away with my girlfriend next week, and then get back to it in Switzerland.

“The aim is top 15 and, with this being the biggest prizefund we’ve had yet, it’s a big step in the right direction in the Rankings and now I’ve just got to push on and keep getting better.”

Earlier in the afternoon, Pavon had shot the best round of the day, his eight under par 63 continuing the Frenchman’s red-hot run of form that has now earned him finishes of fourth, second and second in his last three events.

Lampert birdied four of his final five holes to join him as the clubhouse leader before King’s final flourish was enough for a 17 under par total, and a well-deserved win.

Alexander Bjӧrk, Gary Hurley and Jurrian van der Vaart finished in a tie for fourth place on 15 under par while Ruadhri McGee had earlier taken just 30 shots on his first nine holes, the Irishman finishing inside the top ten alongside Finland’s Jaakko Makitalo and Italian Andrea Pavan.

King hoping to reign after Montecchia rainNews
9 May, 2021
Gary King will take a one shot lead into the final round of the rain-affected Montecchia Open by Lyoness after an eight under par second round of 64 took him to 15 under par at Golf della…
Hurley catches early Montecchia lead before storms hitNews
9 May, 2021
Rain once again stopped play at the Montecchia Open by Lyoness but not before Ireland’s Gary Hurley posted the clubhouse target of 14 under par after completing his second round at Golf della…
Bjӧrk's birdie blitz earns Montecchia Open leadNews
9 May, 2021
A sensational finish from Alexander Bjӧrk, birdieing his last four holes, gave the Swede the first round lead ahead of Ireland’s Gary Hurley and Dutchman Jurrian van der Vaart at Golf della…
Race to Costa del Sol returns in South AfricaNews
9 May, 2021
A new Ladies European Tour (LET) season gets underway next week with the Investec South African Women’s Open at Westlake Golf Club, the first event on the 2021 Race to Costa del Sol. The Race…