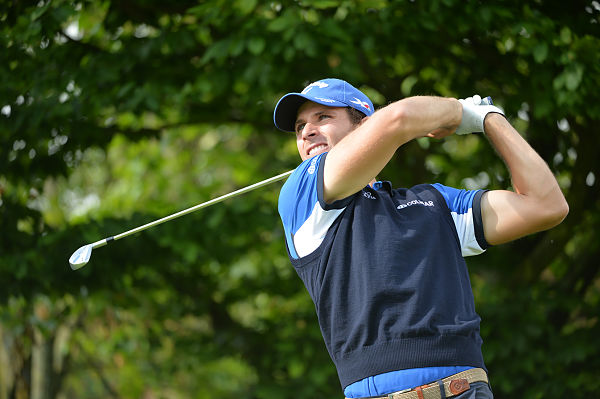 Andrea Pavan stormed clear of the field on another rain-affected day at the Najeti Open, firing a fine five under par round of 66 to take a three-shot lead, with half the field still to complete their second rounds when darkness fell on Aa Saint-Omer Golf Club.

Overnight weather delayed the start of play by two hours before a further deluge flooded the course, preventing a resumption until well into the afternoon.

Pavan then made the most of the softer conditions, finding six birdies in his first 12 holes to reach ten under par, two bogeys and another birdie ultimately leaving him three shots clear of overnight leaders Victor Riu and Duncan Stewart, who had only completed three holes when play was stopped for the day.

The Italian, a four-time winner on the European Challenge Tour, showed his pedigree once again in handling the testing conditions in northern France and was pleased with his position at the halfway stage.

“I think it’s a very good round, especially on top of all the weather and delays,” he said. “We’ve been out here since early, it’s a long day, but I tried not to think too much about it.

“It was especially good since I would say I’m not very comfortable off the tee, and this is not the course where you can mishit it off the tee and get away with it, but I hit some good ones today.

“My iron game was very good today as well and, of course, I had to make a few putts, but I hit it course – on this course you have to hit it close.

“Luckily the conditions are soft which, even though it was windy, made it a bit easier, but this course is so tricky that you can hit a good shot and end up off the green with a tough chip.

“It’s that kind of golf course where you just have to trust your yardage and hope it goes close and when you miss, hopefully it doesn’t go on the wrong side – as long as when you miss you only make bogeys round here, limit the damage, that’s important.

“This is a course where patience is important. You can have a good day and go low, but if it’s not your day it’s very easy to drop shots around here.”

The 27 year old’s last win on the Challenge Tour came on French soil in 2013 and he has made a consistent start on the 2016 Road to Oman, with two top ten finishes to his name already.

However, he admits that he has struggled lately to maintain that form for all four rounds, though he is hopeful he can hold his game together through this weekend.

“I’m pleased that there are still two rounds to go,” he said. “I’ve been struggling a bit on the weekend lately just to put numbers together – I’ve been coming into the weekend always up there and I’ve just got to try to stay there this week.

“Last time I won it was different because I had a really big lead, and I honestly feel like this tour is getting better and better – the cuts are lower, the winning scores are lower, you just have to play well.

“I’m not going to focus so much on winning, especially with two rounds to go – it will cross your mind but what I really want to do and hopefully I can keep hitting good irons, keep making some putts, and we’ll see where that gets me.”

Matthieu Pavon, the highest-ranked player on the Road to Oman in this week’s field, delighted French fans with a second sub-70 round which moved him into the top five on five under par.

Northern Ireland’s Chris Selfridge matched Pavan for the low round of the day, his 65 featuring six birdies and an eagle as he climbed into the top ten.

For the latest scores, see here