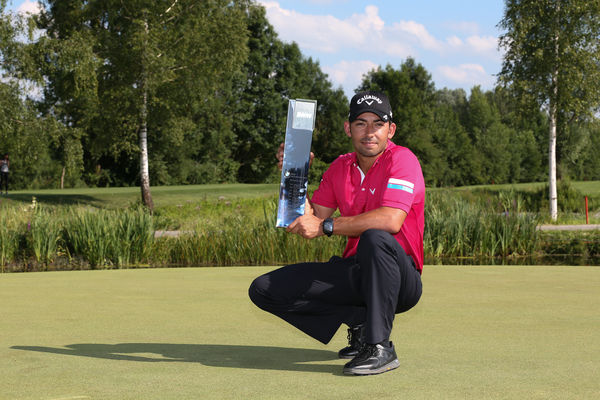 Instinct can’t be bought, nor trained, nor taught. Instinct is in the blood. Instinct is innate. It’s a sensation. Instinct is like a lackadaisical lion. It dozes off, it’s patient, it’s quiet…and suddenly it activates. Whatever the cause may be. It doesn’t matter. An image, a movement, a simple smell. Ears are hot and nothing else in the world exists except the prey.

Pablo Larrazábal has instinct. Killer instinct. Like a golfer who plays on pure vibes, when he senses the prey, he latches on and won’t let go. If it escapes, it’s because it outsmarted him, because on this occasion it was faster, because the rival made more birdies. There’s nothing left to do other than to take his hat off and applaud. However, when Pablo is on, when his game is on point and the putt responds well, it’s really unlikely for the pursuit not to come out a success.

Larrazábal has the innate capacity to bring out the best in himself in moments of high tension. The tauter the rope, the better the shots are, the more confident he becomes, the more intense his gaze is, and the more powerful he is on the greens. If he’s out to win it, the rest should make way. The rival makes no difference. Furthermore, the bigger, the better. The higher the pressure, the better Pablo works. He demonstrated his talent once again at the BMW International Open. The fourth victory of his professional career and another occasion with a highly distinguished victim. This time it was Henrik Stenson, just as on other occasions it was Rory McIIroy, Phil Mickelson, Sergio García, Lee Westwood and Colin Montgomerie. Pablo is a big-time competitor. A predator.

The victory in Munich, the first one of the season of Spanish golf in one of the two major tours, is another demonstration that serious, hard, painstaking work pays off. Larrazábal is an incredible professional. He goes for a formula and sticks with it for life. He gives it time. He has faith. He believes in it up until the very last moment. This year he decided to put an important spin on his work. He was accompanied by Álex Larrázabal, his brother, and felt like things were headed down a good path, even though the results weren’t going as spectacular as hoped for. The Open de España was a significant setback. It’s a tournament he really enjoys and things didn’t go well. But that didn’t alter his current state, nor knocked him off his path. The roadmap continued to be the same, and it took him to the German title.

After taking home the trophy in Munich, Larrázabal was once again referred to as the  “mystery man” who has been working on the mental aspect of the game for a long time now, and who considers this a key element to his evolution. Another threw me off on Monday afternoon: “I don’t know who, but that’s not his secret. He has magic hands, and that isn’t taught. Nor can be instinct.

Bland wins maiden title in 478th appearance at Betfred British MastersNews
18 May, 2021
Richard Bland claimed an emotional first European Tour victory in his 478th appearance after the English veteran overcame young Italian Guido Migliozzi in a play-off to win the Betfred British…
European Tour, Ryder Cup Europe and Two Circles create Tour Consumer ExperiencesNews
18 May, 2021
The European Tour and Ryder Cup Europe today announced Tour Consumer Experiences, an 11-year strategic venture with industry-leading sports marketing and data technology company Two Circles. …
Higgo powers to another win on the CanariesNews
18 May, 2021
Garrick Higgo continued to write his own chapter in the European Tour history books as he powered to a second win in three weeks at the 2021 Canary Islands Championship. Just 14 days after he…
Race to Costa del Sol returns in South AfricaNews
18 May, 2021
A new Ladies European Tour (LET) season gets underway next week with the Investec South African Women’s Open at Westlake Golf Club, the first event on the 2021 Race to Costa del Sol. The Race…